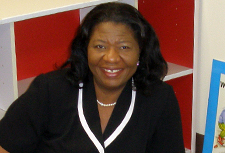 Members of the Aquinas College School of Education often describe what’s called “the Aquinas Difference:” the distinct learning opportunities, passionate faculty, and practical approach to teaching that uniquely characterize an Aquinas education. Aquinas students are encouraged to see knowledge through the lens of the four Dominican charisms: prayer, study, community, and service. Yet what makes these concepts real for Aquinas students is not just their presence on brochures or promotional materials, but in the lives of their professors who exemplify these values.

Dr. Nkechy Ezeh, Associate Professor in the School of Education, has served the Aquinas community for nearly 19 years. Her focus for this time has primarily been in early childhood and general education. The impact she has had is far reaching. “I’m training teachers that will be working with preschool children; kindergarten children; first, second, and third grade teachers,” she said. “I’m also a part of the general-ed faculty, so I get to teach future teachers of elementary, middle and secondary.”

Ezeh is a celebrated member of the academic community, both here and abroad. In the past, she has served on the Oxford University Early Literacy Round Table. She is also an advocate for the work of several not-for-profit organizations. Embodying the Aquinas commitment to service, Ezeh is passionate about the less fortunate and the often-overlooked, particularly among young people. This commitment has manifest itself in various projects and undertakings, and it has not gone unnoticed.

This year, Ezeh was presented with the 2012 Service to Children Award by the Family Future organization for her founding of the Early Learning Neighborhood Collaborative. “Family Future is an organization that advocates for children, to make sure that our community is raising healthy children that are free from abuse and neglect,” Ezeh said. The award is directed toward a select individual making a significant impact on those Ezeh herself describes as “vulnerable children.” She said, “My passion is advocating for vulnerable children, children that don’t have a voice: either because their parents are poor, or not in the house – they’re just more vulnerable.”

Dr. Ezeh’s work has allowed for the expansion of community projects on behalf of these children. The Early Learning Neighborhood Collaborative project, for which she was awarded, ultimately brought about a $5 million grant from the W.K. Kellogg Foundation in 2011 for preschool service and early care opportunities in Grand Rapids, Michigan. That $5 million grew by an additional $1.5 million in 2012. The second grant sponsored the AVANCE Parent Child Education Program, which provides (among other things) family support and early childhood development opportunities. Simply put, Ezeh’s work has an impressive scope and magnitude.

This focus on the practical applications of the ideas in her classroom has had an impact on her Aquinas students as well. “Ever since I’ve been at Aquinas College, I’ve always kept one foot at Aquinas, and one foot in the community,” she said. “Meaning: Aquinas gives us the theory. I teach my students about the theory – ‘child development,’ what does that mean? – but being a part of the community allows me to give my students the total package. [My students] can see not only how the theory applies in the classroom, but I can take them into the community to show them what it really means to be working with children.”

Ezeh is convinced that this practical approach has a meaningful impact on her students’ development into compassionate, thoughtful teachers capable of reaching a wider range of students. “If I have Aquinas College students just come, get an education and go home, they will not reach all children,” she said. “Our students may not have had the opportunity to work with vulnerable children. I mean going into the inner-city, going to see the rundown houses and centers that just don’t have enough, but yet they are trying to educate children.”

It’s a desire to share the harsh realities of these children’s lives that Ezeh hopes inspires new teachers to make an impact in the communities of which they are a part. The hard work is far from over. Yet through her engaging classroom opportunities, her eye toward service and community, and her long-standing impact on future teachers, Dr. Nkechy Ezeh is a shining example of the Aquinas Difference.