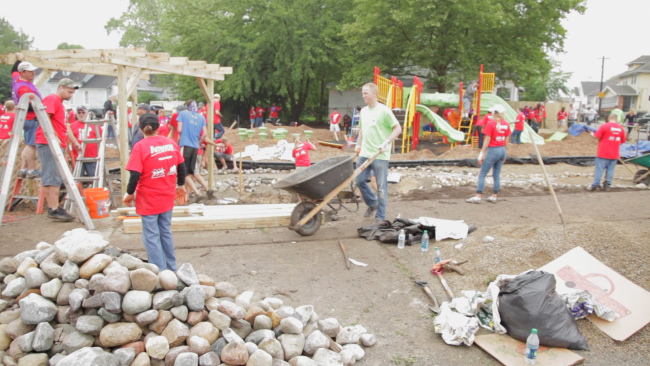 Led by KaBOOM!, Amway brought in over 150 volunteers to build the playground in six hours.

The rainy morning did not stop the team in their efforts to bring unique, safe outdoor play equipment to the neighborhood.

You have to remember that this was a playground that they couldn’t use in the past, because it was condemned. So for them to come out and see this, it’s almost like Christmas morning,” said Dr. Nkechy Ezeh of ELNC.

The playground is not only accessible to ELNC preschoolers, but also to over 900 children in the community.

Each year Amway searches for an underserved area to build a new playground that encourages outdoor play and sense of community.

ELNC is a group of seven organizations that provide accessible, quality preschool education for children in the most vulnerable areas of Grand Rapids and is this year’s Connecting with Community Award winner.

Amway is a Connecting with Community partner has collaborated with KaBOOM! to create 12 local playgrounds in Kent County.

Everyone has a chance to sit back and look at the work they’ve done all day long and just be amazed at the fact that they built this playground. And it’s ready to go for the kids in just one day,” said David Madiol of Amway.