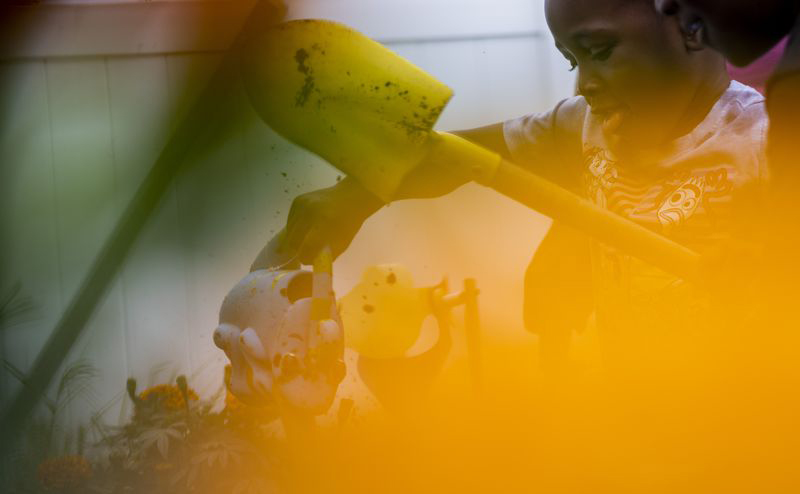 “When children are not developmentally ready, they are so behind in every aspect,” Ezeh said. “I wish the world would hold still so our Black and brown children can catch up, but it doesn’t work that way.”

Communities of color have a harder time gaining access to a quality early childhood education, often having to rely on a family member instead of a licensed program for childcare.

“Families in survival mode with limited resources have scant access to educational materials and guidance to teach their children at home,” Washington said. “Any economic setback or family emergency can propel them even farther away from engaging in their child’s early development.”

A program dedicated to improving the spaces of early childhood learning providers is working to give those disadvantaged children access to a better early childhood education.

Learning Spaces is an initiative from IFF, an organization which helps finance nonprofit and service organizations.

“The work and the investment comes into strengthening the space so that the children are inspired and have a healthy and safe learning environment to receive their care and their education,” Ashanti Bryant, IFF Director of Early Childhood Services, said.

The program began in Detroit in 2016.

Since then, Bryant said Learning Spaces has been able to impact 80 plus providers in the city who have received a total of over $4 million of investment into their facilities, with approximately over 2,000 children impacted.

Learning Spaces recently expanded to Southeast Grand Rapids with the help of local community partners and the W.K. Kellogg Foundation, a grantmaking organization with focus areas of Grand Rapids, Detroit and Battle Creek. For the last five months, the program has reached seven providers and served 100 plus children.

“The research is very clear about the role of getting children the best start possible early on,” Yazeed Moore, program officer for the W.K. Kellogg Foundation, said. “Knowing that if kids are provided with a quality early childhood experience early on, it increases their indicators across education, income, health, wellness.”

“This level of investment into a childcare provider can be transformational for her space where she cares for and educates her children and her team,” Bryant said.

One of these women, Lashawn Bridges, is director and owner of Blessed Beginnings Learning Center in Detroit. Bridges said her program offers social and emotional support along with cultural awareness to promote a positive self-image for young students of color.

“When we read stories to our children they will see children who look like them, they see communities where the children may come from,” Bridges said. “We try to reflect on our children’s experience no matter how vast or wide or different it might be from our experience.”

Early childhood education teaches children from 0-5 years old how to share, make friends and think critically in order for them to develop socially, emotionally, cognitively and physically before they reach preschool or kindergarten.

Data from Great Start to Quality, Michigan’s quality rating and improvement system that supports early childhood programs and providers, reports that there are 3,751 child care and preschool centers open across Michigan as of May 2021.

A 2015 early childhood analysis conducted by IFF in the greater-Detroit area paved the way for Learning Spaces. It found not only the need for more early childhood learning opportunities, but specifically at the neighborhood level, according to Bryant.

“We engage with community-based providers who elevated alongside the need for developing high-quality early childhood facilities in Detroit to serve more children because the gap was so significant,” Bryant said.

Ezeh is founder and CEO of Early Learning Neighborhood Collaborative (ELNC), an early childhood education service system in Grand Rapids and one of the local community providers involved with Learning Spaces.
Studies from the ELNC in their target areas of Grand Rapids and Battle Creek show that children of color specifically are 18 months behind when they get to kindergarten, said Ezeh.

Improving access to a good early childhood education could change that.

Ezeh said that it’s crucial to a child’s development for them to be learning within their own surroundings, but in her Southeast Grand Rapids neighborhood, it’s hard to find adequate buildings for childhood learning spaces and home-based learning only provides services for up to six children.

“We don’t need to put our children in a yellow bus and take them to another community for 30 minutes on the bus, what message is this sending to our children?” Ezeh said. “It’s sending the message that my community is not good enough for me to be educated.”

She added that she’s excited for the work Learning Spaces is doing because enhancement of a home-based program’s learning environment means more available slots for children right in their own areas.

“In a center you can have up to 30 or 40 or 50 (children), but where we don’t have safe buildings for early childhood learning centers, then we can work with families to have learning spaces in their homes,” Ezeh said.

In a 2018 Grand Rapids study, IFF found a 72 percent service gap between the number of children aged 0-5 years old in need of care and the amount of slots available for them with licensed and registered providers.

In a larger scale effort to close that gap, IFF and the W.K. Kellogg Foundation are working to build a 12,000 square-foot early childhood education center in Southeast Grand Rapids by Fall 2022.
The building will have programming, health services and support for children and families, as well as additional resources for education providers.
“Learning Spaces is not necessarily the silver bullet, it’s a piece to the building of a stronger childhood ecosystem for children and family and a home based provider,” Moore said. “Kind of needing to connect all the dots and all the resources that we know that go into the community.”

“This is just chipping away at that block,” Bryant added.

Access to childcare became more apparent during the coronavirus pandemic. Both Bryant and Moore said they’ve taken part in conversations with state leaders surrounding expanding early childhood learning and childcare in Michigan.
“The need for childcare didn’t stop, in fact, it was even more significant,” Bryant said. “I have episodic conversations with the state around a potential, frankly, statewide analysis of childcare in light of COVID-19.”
In a June press conference, Michigan Gov. Gretchen Whitmer proposed using federal money currently available to the state in order to get more 4-year-olds into preschool programs.
Whitmer’s plan is to invest $405 million — $255 million in federal funding and $150 million in state School Aid Fund dollars — to expand the state’s Great Start Readiness Program, which provides state-funded preschool options for four-year-old’s in income-eligible families.
An additional $50 million in federal funding would go towards expanding preschool options in underserved areas, providing additional transportation access, staff scholarships and outreach efforts under the plan.
The Great Start Readiness Program, in tandem with the federal Head Start program, currently provides full-day or half-day preschool to 43,100 children whose families are at or below 250% of the poverty line, or $66,250 for a family of four, according to the state. An estimated 65,400 children are eligible.
Whitmer said at the press conference the goal is to leverage some of the billions of dollars available to the state from the American Rescue Plan to close the gap and get more eligible children into preschool programs.
“Today, too many eligible kids are stuck on waitlists and unable to access the incredible opportunity because of a lack of funding, and that’s just not acceptable,” Whitmer said.
Detroit Mayor Mike Duggan called early childhood education “critical for the development and future success of all children.”
Bryant calls the lack of early childhood education opportunities a “national priority” and a “crisis.” He said he hopes to see efforts to increase access outside of Michigan, too.
“The need to support early childhood care providers to stabilize or expand so that we can continue to serve effectively and with excellence, more children,” Bryant said.
IFF recently completed an additional analysis of early childhood learning in Traverse City, and would like to eventually expand the program to North and West Michigan.
View This Article