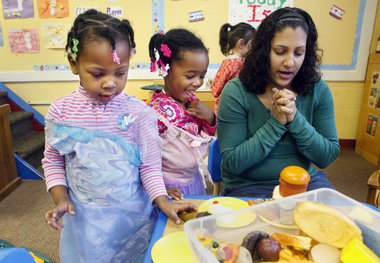 The W.K. Kellogg Foundation in Battle Creek, Michigan, has announced a four-year, $5 million grant to the Early Learning Neighborhood Collaborative in support of the organization’s efforts to improve early childhood education in some of Grand Rapids’ poorest neighborhoods, MLive.com reports.

More than 80 percent of kindergarteners in Grand Rapids are not ready for school, and there are no structured early learning opportunities for the majority of the five thousand children in the city’s poorest neighborhoods, said Nadia Brigham, a Kellogg Foundation program officer.

The grant will be used to provide technical, developmental, and educational support to ELNC and its partner organizations, which include Baxter Community Center, the Hispanic Center of Western Michigan, New Hope Baptist Church, South End Community Outreach Ministries, Steepletown Neighborhood Services, The Other Way Ministries, United Methodist Community House, andWellspring Church of Grand Rapids. “This collaborative turns the paradigm upside down in terms of leadership and advocacy and empowerment around a community — the neighborhoods making decisions regarding their children,” said Brigham.

The Kellogg Foundation was an early investor in ELNC. Nkechy Ezeh, the organization’s executive director, said the collaborative had been a vision for more than decade, but organizers began putting together the pieces in 2009-10 and now can help more families with Kellogg’s support.

“Early intervention is effective and needs to be implemented for children from low-income homes as soon as possible,” she added. “As a child reaches age four, especially those children who have not experienced ideal developmental environments previously, the availability and access to quality preschool is critical to their future success in school.”